In some demos, you may need to randomize multiple transitions from the same scene. You are likely to do this in scenes that involve unpredictable results, such gambling, a player hitting a baseball, or randomly spawning one of several monsters.

For example, to reflect the randomness of a possible outcome in a baseball game, you can create multiple transitions with different probability in your demo, for example, 40% Home Run, 30% Double, 15% Single, 10% pop out, and 5% ground.

With randomized transitions, the demo will move to an alternative flow somewhat at random rather than as a result of a predefined transition logic. To accomplish this, you need to set the appropriate probability values fro each alternate transition.

What Your Need to Know

Here’s what you need to keep in mind about setting probability:

How to Randomize Transitions 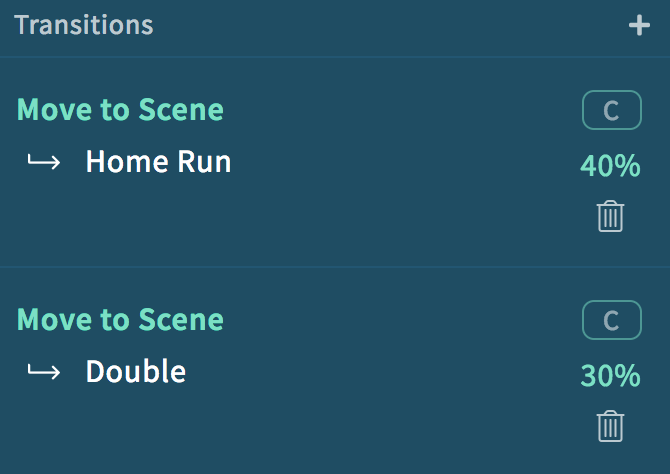 Let us know if this helped answer your question or solve your problem so we can continue to improve our documentation and training.
Tags:
Previous Transitions by Elapsed Time
Next Containers
Table of Contents