Gestures are invisible layers that indicate where on the screen the user is expected to perform a specific type of interaction, such as tapping, swiping, and so on.

Typically, most user interactions in a demo are immediately followed by a transition to another scene and/or an action, showing the results of the interaction. This means that all gestures must include at least one transition or action. See also What You Need to Know below.

Tip: For certain actions, you may use Buttons instead. These are six special kinds of tap gestures with predefined functionality—Go to Scene, App Store, Replay, Close, Open URL, and Android Share Button—which you can drag from the Elements panel to the canvas and define their properties accordingly.

By itself, a gesture bounding box serves only as a gesture recognition area. You need to specify the type of gesture in the Properties panel of the selected element by clicking  Add Gesture to Area and making the desired selection.  For details, see Add Gestures.

By default, in Canvas View, a gesture appears as a dark, semi-transparent bounding box with a blue border. The box defines the area on the screen where you want to require the user to perform a gesture to activate an action in the current scene.

In Path View, a gesture is shown as a smaller version of the scene to which you added it, with the type of gesture displayed at the top and the gesture area indicated in semi-transparent green.

In the Layers panel, gestures appear with the names you assigned to each of them in their properties. By default, gestures appear in the order in which you added them to the selected scene. To change the order, select the Show All checkbox and drag the gestures up or down the list as needed. For more details, see Elements and Layers. 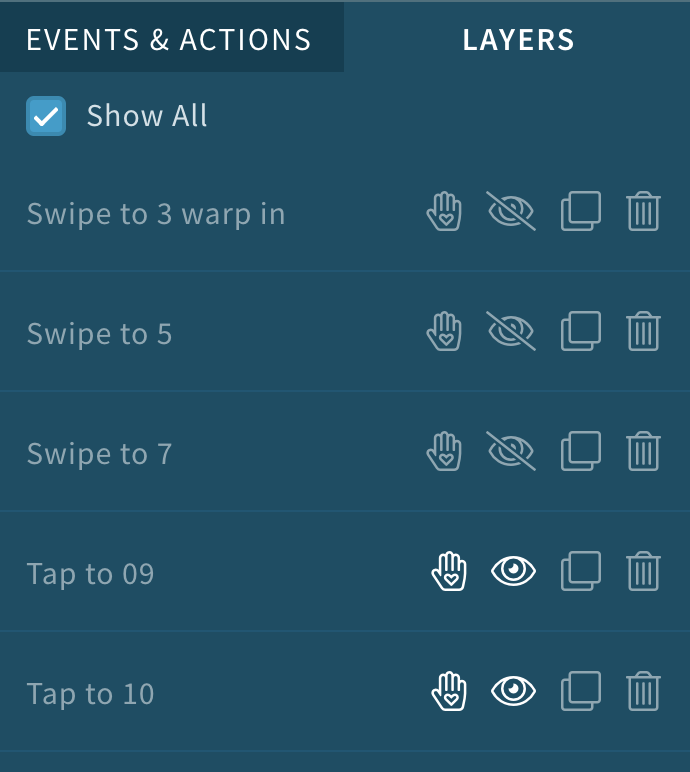 What You Need to Know

Here’s what you need to keep in mind when working with Gesture elements:

Let us know if this helped answer your question or solve your problem so we can continue to improve our documentation and training.
Next Transitions
Table of Contents