Has it really been 2 weeks since GDC, and is it April already? We have been humbled by the reception of AppOnboard Studio and thank everyone who came out to demo our new #nocode toolset at GDC a couple weeks ago. We are inspired by the ideas that are already being created and look forward to seeing what you create. Sign up for early access here!

A lot has happened in the past couple weeks, and we wanted to share some highlights from our GDC launch events, as well as some key announcements in the space from Google and Apple.

If you attended GDC, you probably saw our “wave” icon somewhere around Moscone Center and inside the W San Francisco. From giving demos of AppOnboard Studio at our 3rd annual fireside booth at the W to speaking with Google at our “From Art to App” VIP Event on Tuesday, March 19th, our teams were busy and loved every minute of it! Check out a quick recap of the week in the below video:

On the Tuesday of GDC week, we were honored to host mobile executives and industry thought leaders at our From Art to App VIP event. Our CEO (Jonathan Zweig) and COO (Bryan Buskas) spoke alongside Google’s Ben Frenkel about the future of instant app creation and use cases of AppOnboard Studio and how it can help developers speed up their instant app development. Here are some notable quotes and sound bites from each presentation:

“It’s pretty remarkable how far the tools have come to build instant games. I think [AppOnboard] Studio is the best example of where we would like to see the productivity of game developers being.” – Ben Frenkel, Product Manager at Google

“AppOnboard Studio lets anybody with an idea, bring that idea to life.” – Jonathan Zweig, CEO at AppOnboard

We couldn’t have asked for a better GDC week experience, and we certainly look forward to doing it all over again in 2020.

One of the biggest GDC announcements was made by Google when it revealed Stadia, the company’s game streaming platform that is designed to bring players together.

In the presentation, Google’s Majd Bakar stated that Stadia can stream games in 60 fps and with HDR and 4K resolution. In the future, the platform will achieve resolutions up to 8K and frame rates up to 120 fps. Google showed Ubisoft’s Assassin’s Creed Odyssey and it played impressively smooth and the graphics were high quality (yes, you can now stream and play those kind of titles within the Chrome browser). 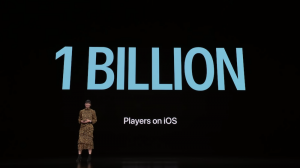 One week later, Apple announced Apple Arcade, one of the many services the company announced on 3/25 (others being Apple TV+ subscription video, Apple News+, Apple Card). If you haven’t seen Ann Thai’s (Senior Product Marketing Manager of the App Store) presentation on it, definitely check it out here.

Apple Arcade is a premium game subscription service that allows users to play a selection of games that work across iOS devices for one monthly cost (ala a Netflix for games).  VentureBeat’s Dean Takahashi encapsulated the service succinctly in his coverage:

You can play them on iPhone, iPad, Mac, and Apple TV. Every game will be playable offline, so you can play anywhere, regardless of your internet connection. All game features are included, with no ads and no additional purchases. Parents can manage kids’ game time with controls.

Apple Arcade will feature a library of 100+ games, including exclusive titles from SimCity creator Will Wright and Final Fantasy creator Hironobu Sakaguchi.

Both Google and Apple are taking different and exciting approaches to help increase the accessibility of gaming for users (cloud-based and unlimited download, respectively). We can’t wait to hear more details (such as pricing) that will be released from both platforms soon, but one thing is for sure: gaming has entered a new level and the opportunities are aplenty for users, developers, and platforms alike.